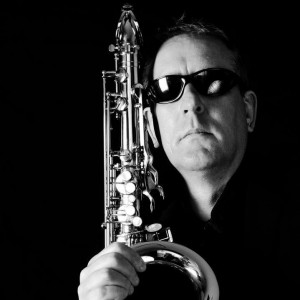 His name is John Smith. At least, that is what the band have named him.

He waltzed into a rehearsal once and just started playing. The rich tones from his tenor sax resonated with such depth that the walls shook. The screaming high tones from Lee Thomson’s solos pierced through the night. The man was clearly meant for our band.

We gave him the address for Saturday’s gig, and ‘John’ was in the band.

He arrived at the gig in a Hummer driven by his minder. It was all chrome and blacked out windows. Played a blinder at the gig, and left the same way.

All communication is through his minder. We are not allowed to address him. He doesn’t like you to look him in the eye. We have the one photo we can use here that has been authorised by his ‘people’. No other images are allowed.

Please do not approach ‘John’ at any time before, during, or after a gig. One excited fan tried to touch him once during a particularly awesome solo in our Madness set. He got within 3 feet before being hoiked off his feet and removed from the premises by his minder.

As long as he keeps turning up, we are going to ask no questions ….