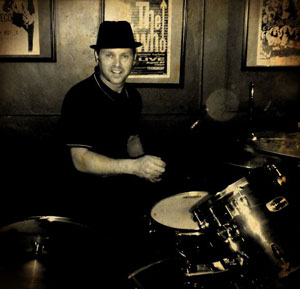 Journalists from the NME and Rolling Stone have all written that Simon’s nickname comes from his ability to keep a regular, solid beat through an entire Special Kinda Madness set.  People have even gone so far as to say that you can set your watch to his drumming.

In reality, his nickname comes from his complete inability to play anything by the iconic 2-Tone band of the same name.

Simon’s boyish good looks have gained him much attention from female admirers in the audience.  As a result, our typical gig rider includes multiple back stage passes, and other band members are obliged to wait outside (sometimes in the rain) while he ‘signs autographs’ for his fans.

Simon’s proudest musical moment when he was the dep triangle player for the Brighouse and Rastrick Brass Band who played with Terry Wogan in his Floral Dance on Top Of The Pops in 1978.