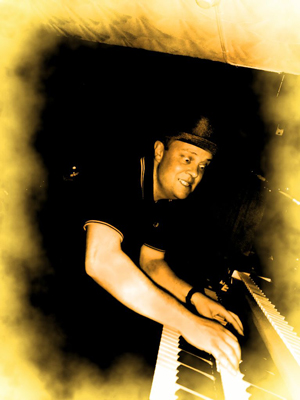 Rumours abound regarding “The Major’s” secret military past. People talk of him being part of a crack SAS unit operating covert missions throughout the Middle East in the early 80s. Anybody asking about it just gets an icy stare.

This gossip was fuelled recently when a dep sax player suggested to him that he was playing one of the chords in My Girl wrong.  The dep went to the toilet after the gig and, bizarrely, never emerged. The rest of the band were duly concerned, mainly because dep sax players are so difficult to find.

The Major’s early piano teacher was Walter Busterkeys, otherwise known as the flamboyant entertainer, Liberace.  Constant ribbing about this by band members culminated in a candelabra being placed on his much-loved Korg BX-3 during a gig. The chief suspect for this prank left the band shortly afterwards and was reported missing by his wife a few days later.

Audience members are strongly advised to applaud and cheer loudly after each and every keyboard solo.